On December 17, the 2021 BNU Phoenix Forum themed by “Global Symbiosis: Education for the Future” was held at Beijing Normal University at Zhuhai (BNU Zhuhai). Under the guidance of the Department of International Cooperation and Exchanges (Office of Hong Kong, Macao and Taiwan Affairs) of the Ministry of Education, the forum was organized by Phoenix School of BNU. Representatives from the Liaison Office of the Central People's Government in the Macao Special Administrative Region, Guangdong Education Association for International Exchange, Zhuhai National Hi-tech Industrial Development Zone Administrative Committee, Guangdong-Hong Kong-Macao Greater Bay Area Primary and Secondary School Principals' Association, and leaders of the kindergartens, primary and secondary schools in the Greater Bay Area, as well as representatives and guests from more than 10 universities attended the forum which focused on the topic of "Building a Global Talent Center and Innovation Highland in Guangdong-Hong Kong-Macao Greater Bay Area". 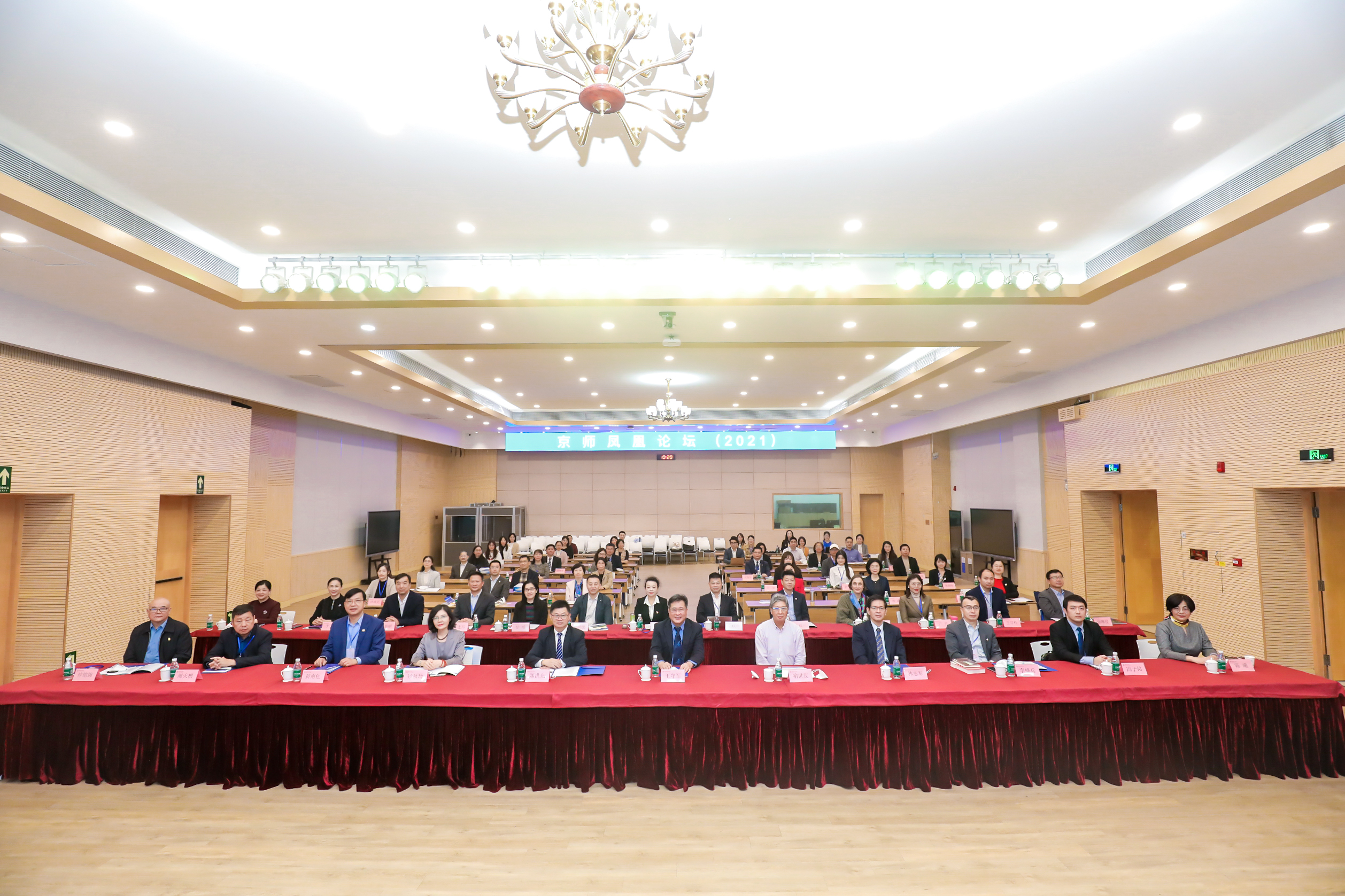 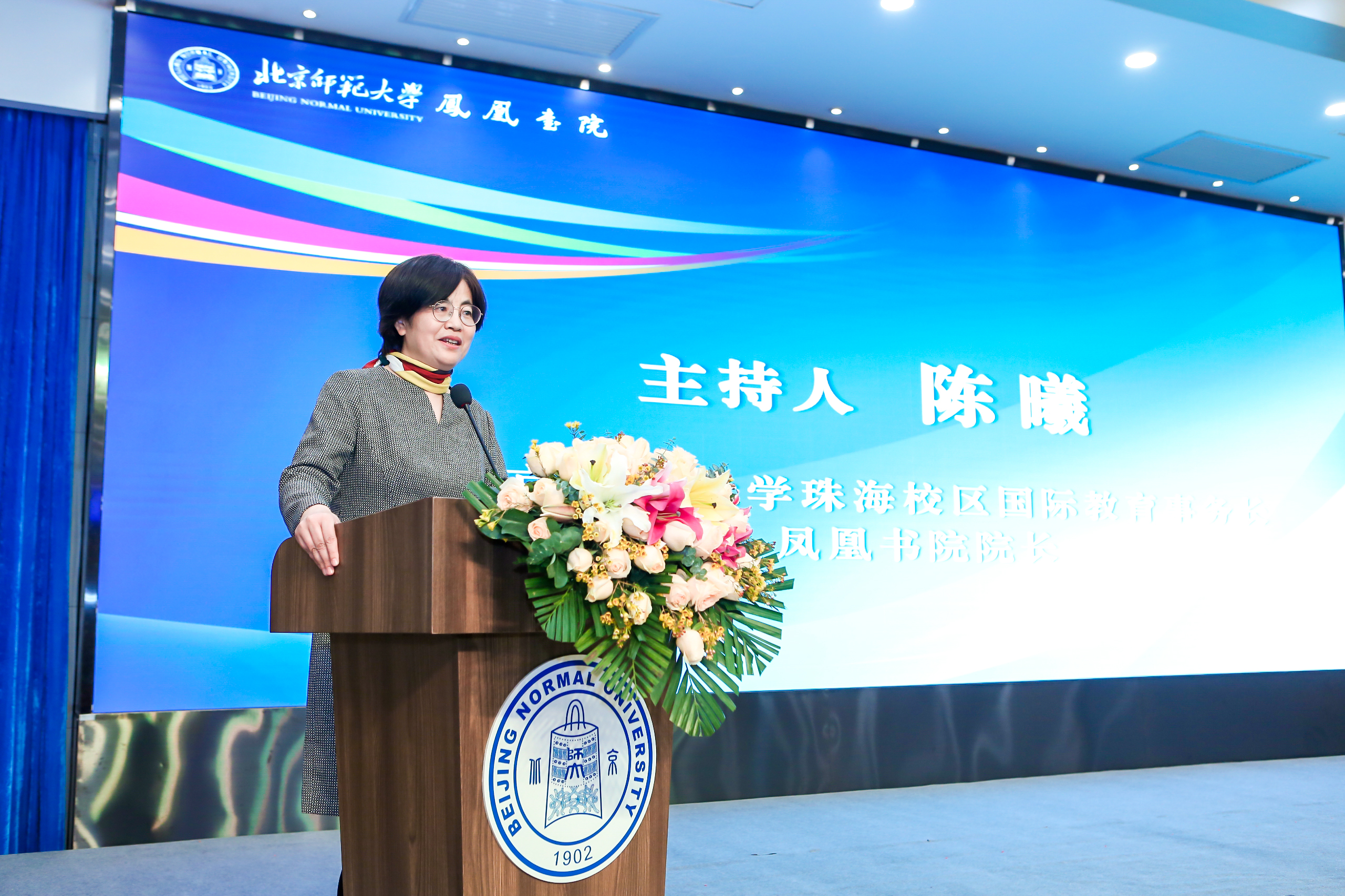 In his speech, Xu Yongji noted that the Ministry of Education attached great importance to and showed great support to the development of education cooperation in the Greater Bay Area. The forum with its focus on "Building a Global Talent Center and Innovation Highland in Guangdong-Hong Kong-Macao Greater Bay Area" was highly relevant to two key factors of the current national development strategy: talent and innovation. In this regard, Xu Yongji put forward three suggestions: firstly, to cultivate top-notch innovative talents meeting the needs of national development, while enhancing the national identity and national pride of young people in Hong Kong and Macao; secondly, to shoulder the responsibility by strengthening collaborative innovation; thirdly, to seize the opportunity and stay committed to the opening-up and cooperation. Lastly, he hoped that BNU would give full play to its discipline strengths and advantages of "One University, Two Campuses" to make greater contributions to the building of the Greater Bay Area into a high-level talent and innovation highland. 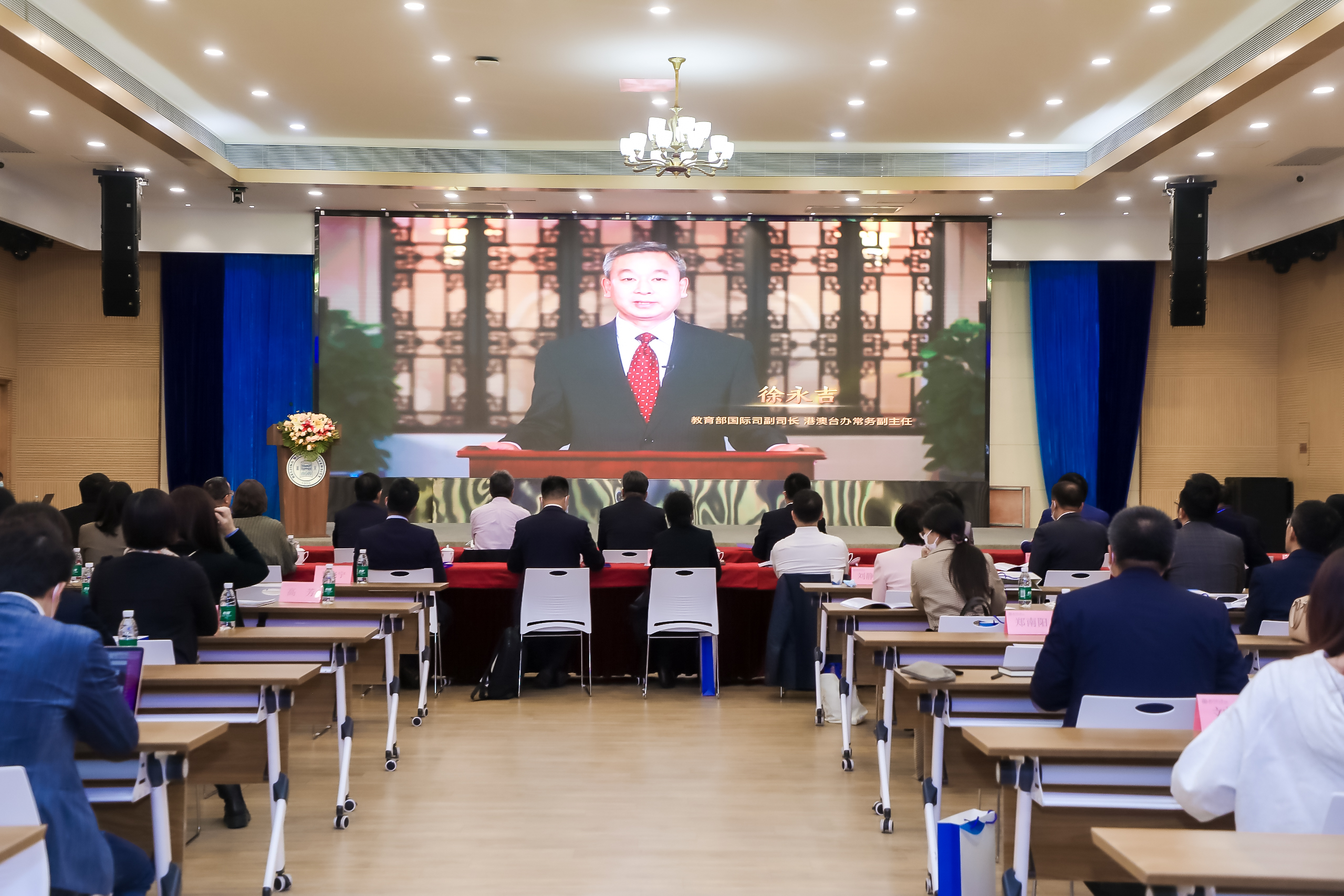 Yu Yougen pointed out that the Greater Bay Area, as one of China's most vibrant economic regions with the highest level of opening-up, had taken on great strategic importance to the overall national development, where higher education shouldered the important task of training and reserving talents for the international first-class bay area and world-class city cluster. The Exchange Association would work with various educational institutions at all levels in the Greater Bay Area to make new and greater contributions with a view to promoting the collaborative development of education, and to creating a new highland for education opening up to the world in the new era. 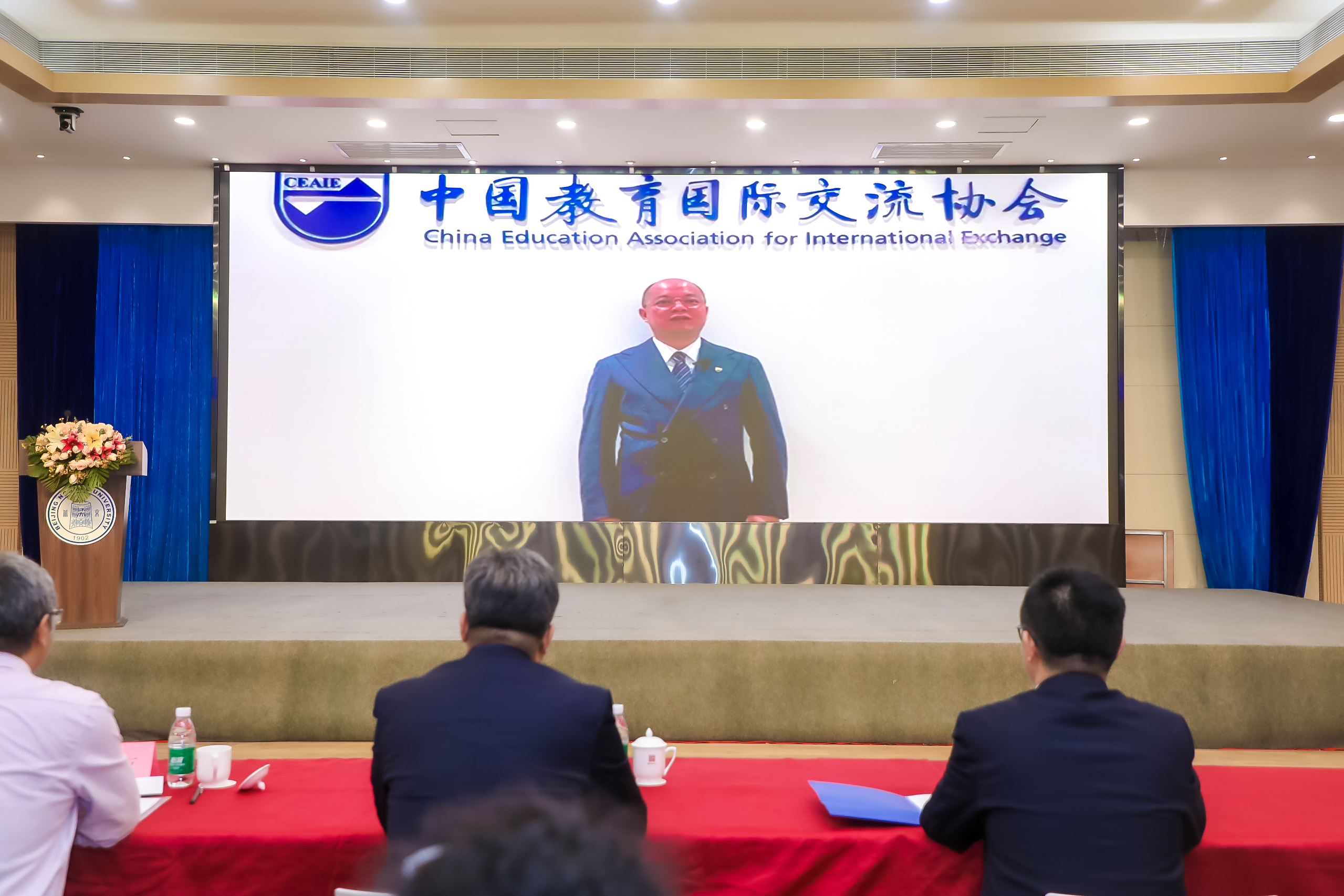 Li Jinjun said in his address that it was vital for BNU Zhuhai to fully leverage the strengths of the Greater Bay Area to pool talent, and to speed up the establishment of its competitive advantages in talent resources so as to provide talent guarantee and scientific and technological innovation support to the development of Greater Bay Area. The Department of Education of Guangdong Province had shown great support to BNU Zhuhai to give full play to its advantages of educational resources, double the efforts of cooperation and exchanges with universities in Hong Kong and Macao to realize the overall improvement of education and talent training quality in the Greater Bay Area as well as building a high-level talent highland. 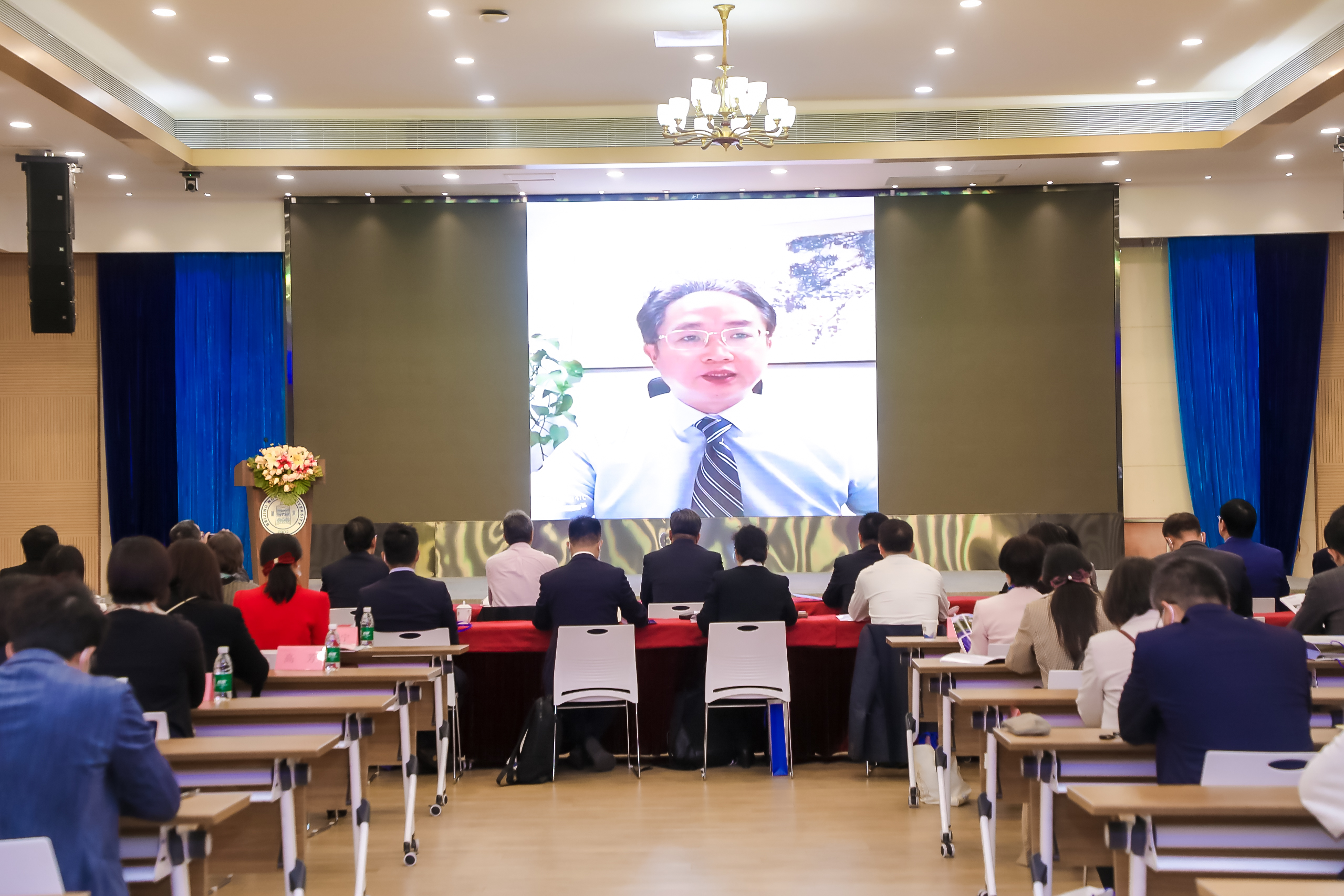 Zheng Hongguang stated that BNU was the top university for the training of excellent teachers in China, where many heads and outstanding teachers of Macao's basic education graduated. In the first year since its establishment, Phoenix School had been actively developing special professional courses while vigorously carrying out special high-quality international education projects, which had its significance in giving full play to the leading role of BNU in the high-quality development of basic education and in serving the education in the Greater Bay Area on a deeper and broader level. 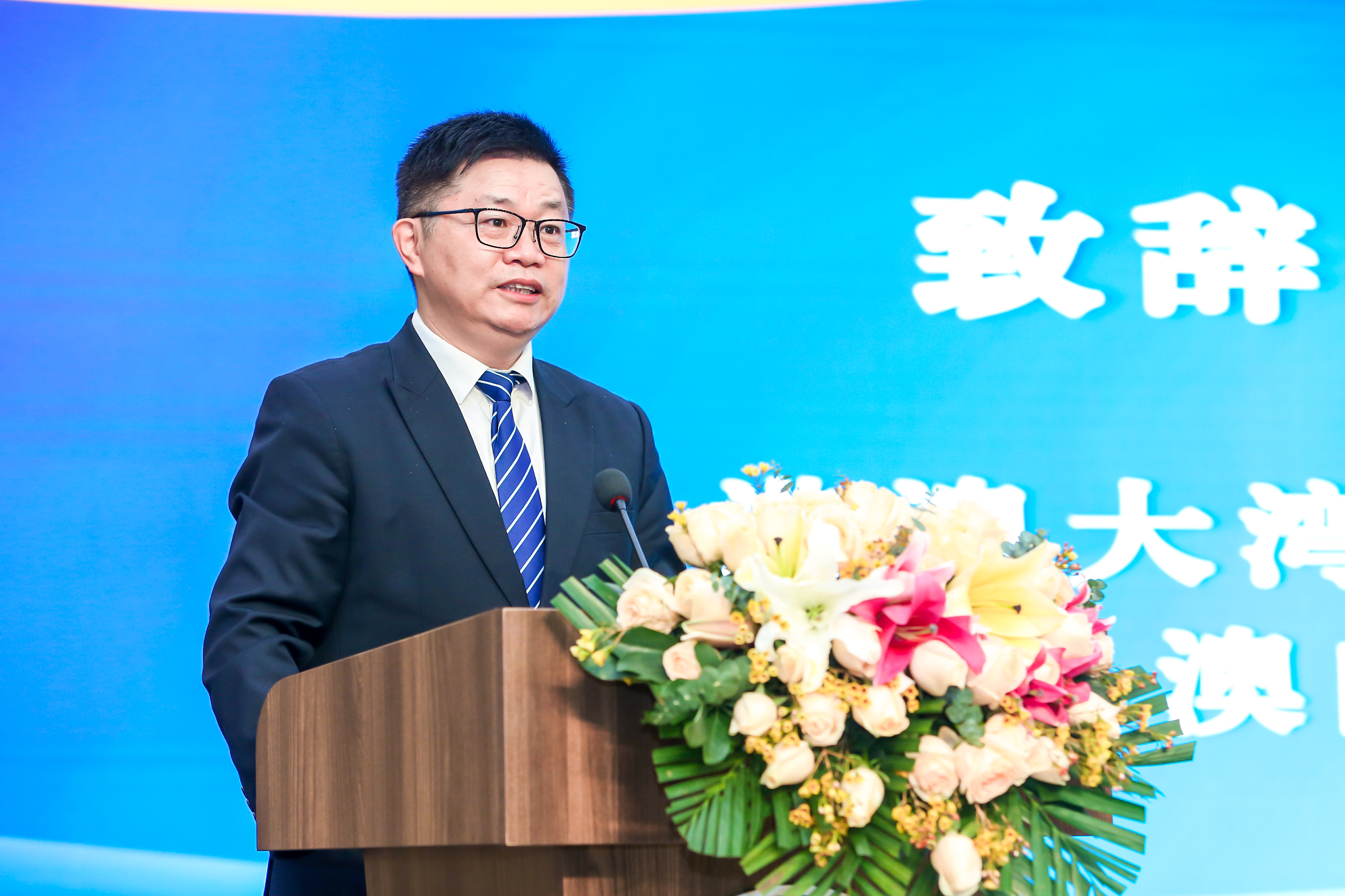 Lin Zhijun introduced the efforts made by Macau University of Science and Technology (MUST) in deepening the innovation cooperation among the Greater Bay Area, building a regional collaborative innovation community with open and integrated development, and responding to the national development strategy for the construction of the Greater Bay Area. He pointed out that in the 21 years since its establishment, MUST had made great strides in various fields which had been recognized by the community. MUST would continue to actively carry out cooperation in science and technology innovation in order to better integrate into the overall development of the Greater Bay Area. 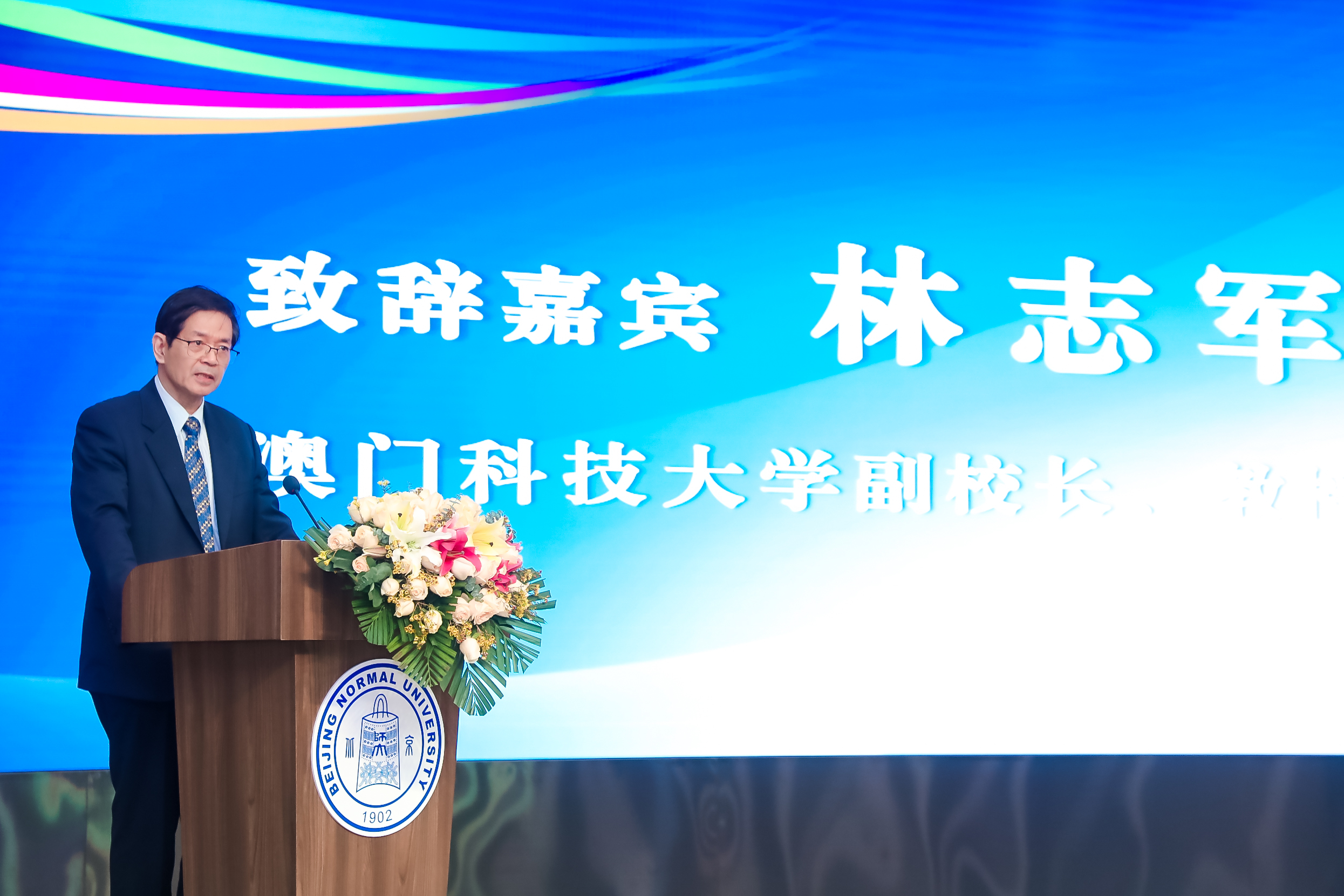 According to Wang Shoujun, it had always been the mission of Beijing Normal University to promote educational exchanges and cooperation in the new era. Guided by the development strategy of “One University, Two Campuses”, BNU Zhuhai had stuck to the principle of “High standard, New mechanism and Internationalization” to explore new paths for the higher education development by leveraging the platforms of the Greater Bay Area. In recent years, BNU Zhuhai had established Phoenix School and Guangdong-Hong Kong-Macao Cultural and Educational Exchange Center, actively strengthening scientific research cooperation with universities in the Greater Bay Area and participating in the development of the Guangdong-Hong Kong-Macao University Alliance to provide a platform for the cooperation of disciplines and specialties among universities in the Greater Bay Area. Educational exchanges and cooperation needed to be underpinned by high-level professionals and educational innovation. BNU Zhuhai would fully leverage its advantages in education and promote the organic connection of education chain, talent chain and innovation chain, so that the fundamental, holistic and pioneering role of education could be fully unleashed in the process of modernization. 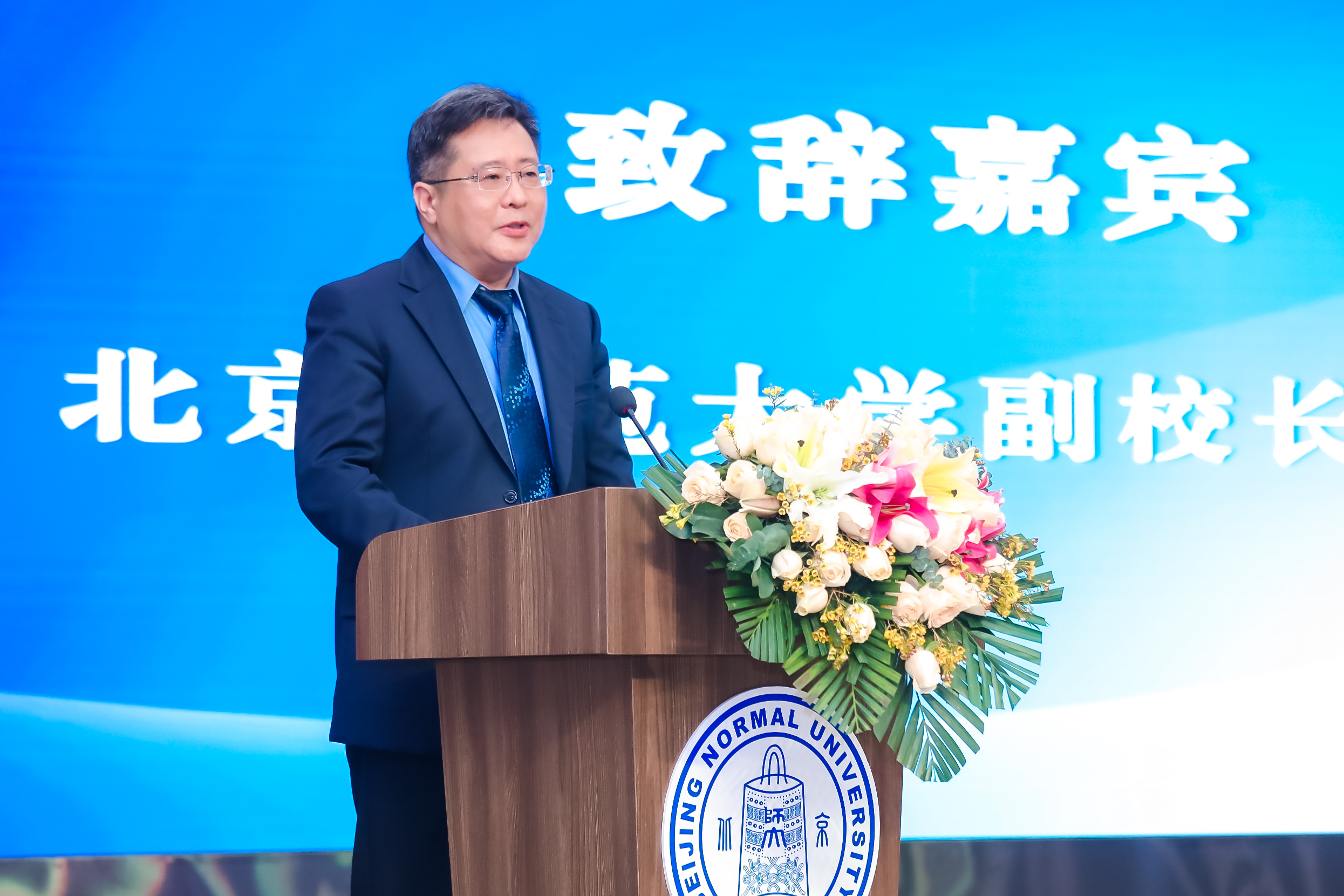 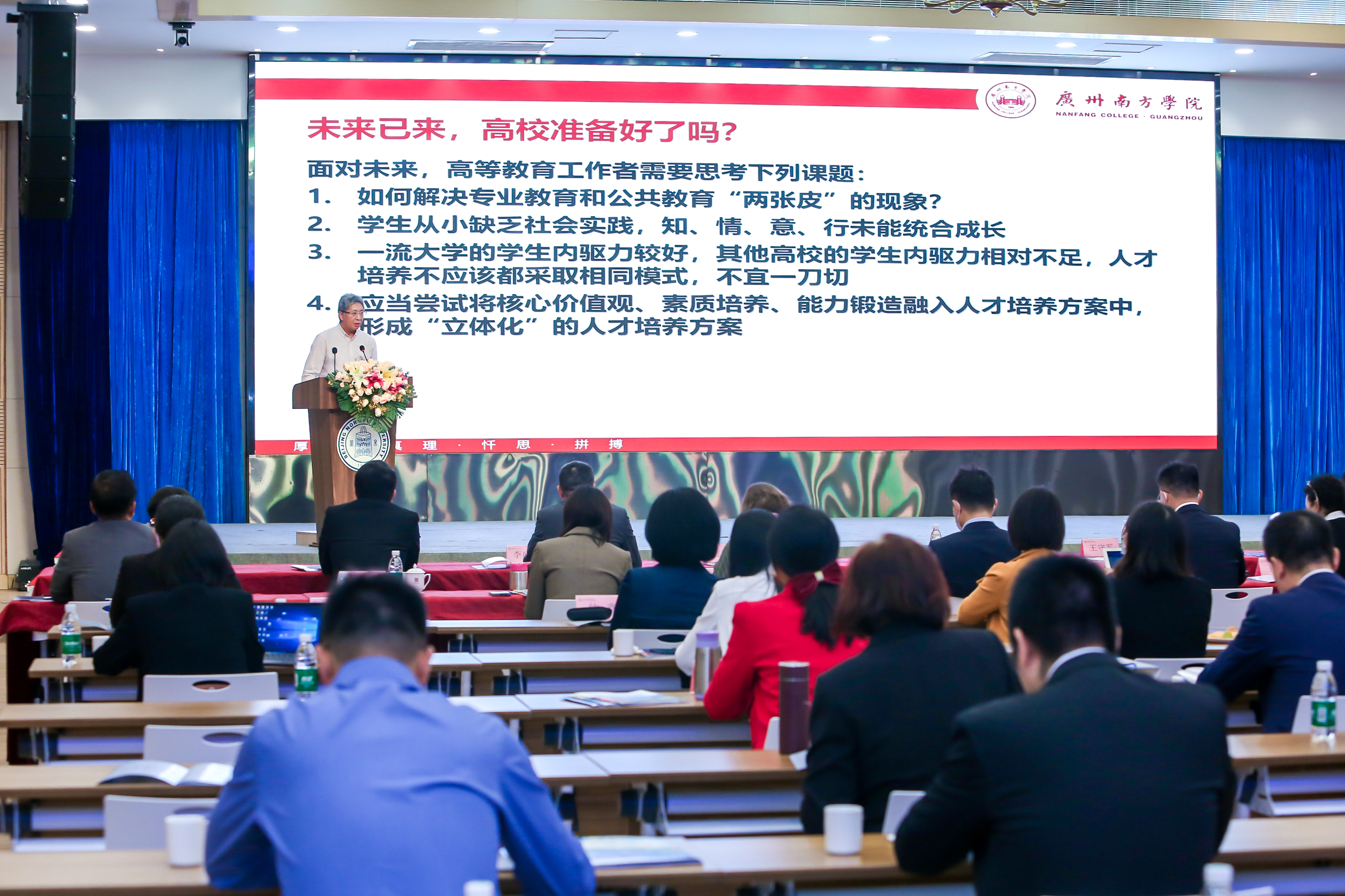 The roundtable of the forum was held in the afternoon. Experts and scholars from the Chinese People's Political Consultative Conference of Zhuhai, Guangdong Education Association for International Exchange, Zhuhai National Hi-tech Industrial Development Zone Administrative Committee, primary and secondary schools and kindergartens in the Greater Bay Area, as well as more than 10 sister institutions, conducted in-depth discussions concerning the issues of "Global Symbiosis: Education for the Future” and "Building a Global Talent Center and Innovation Highland in Guangdong-Hong Kong-Macao Greater Bay Area". 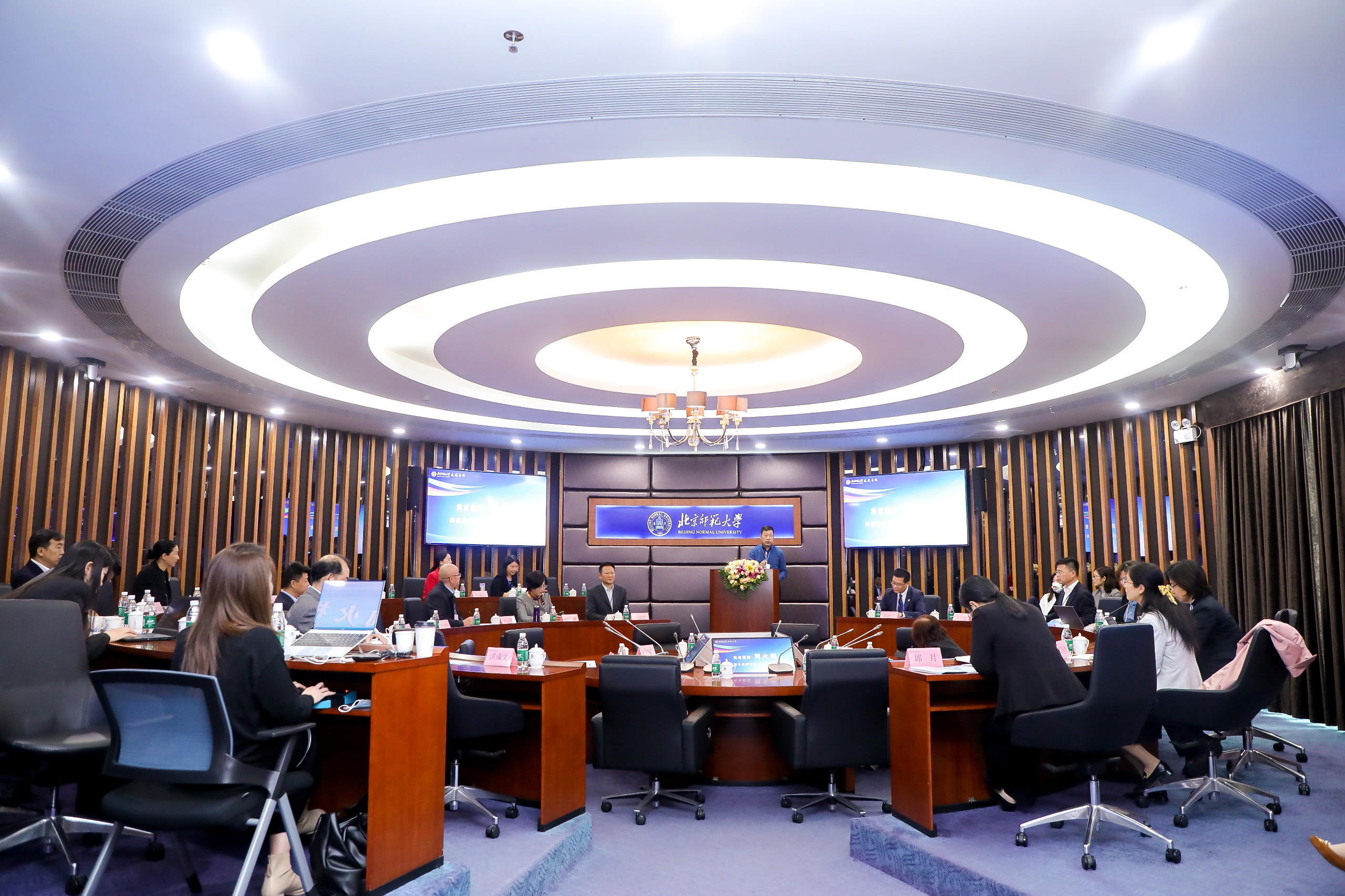 As an important part of the forum, the 2nd BNU Phoenix Lecture was also held. Professor Huang Nansong, Vice President of the Guangzhou Nanfang College, gave a wonderful lecture on pedagogical grammar for teaching Chinese as a foreign language to students. Professor Huang, who taught at Harvard University and was a professor at the Center for East Asian Studies and the Department of East Asian Languages and Cultures at the University of Southern California, gave a lecture that was well received by students and teachers. With the aim of developing an international perspective and cultivating globally competent talents, the BNU Phoenix Lecture provides a platform for students to acquire diversified and international knowledge. 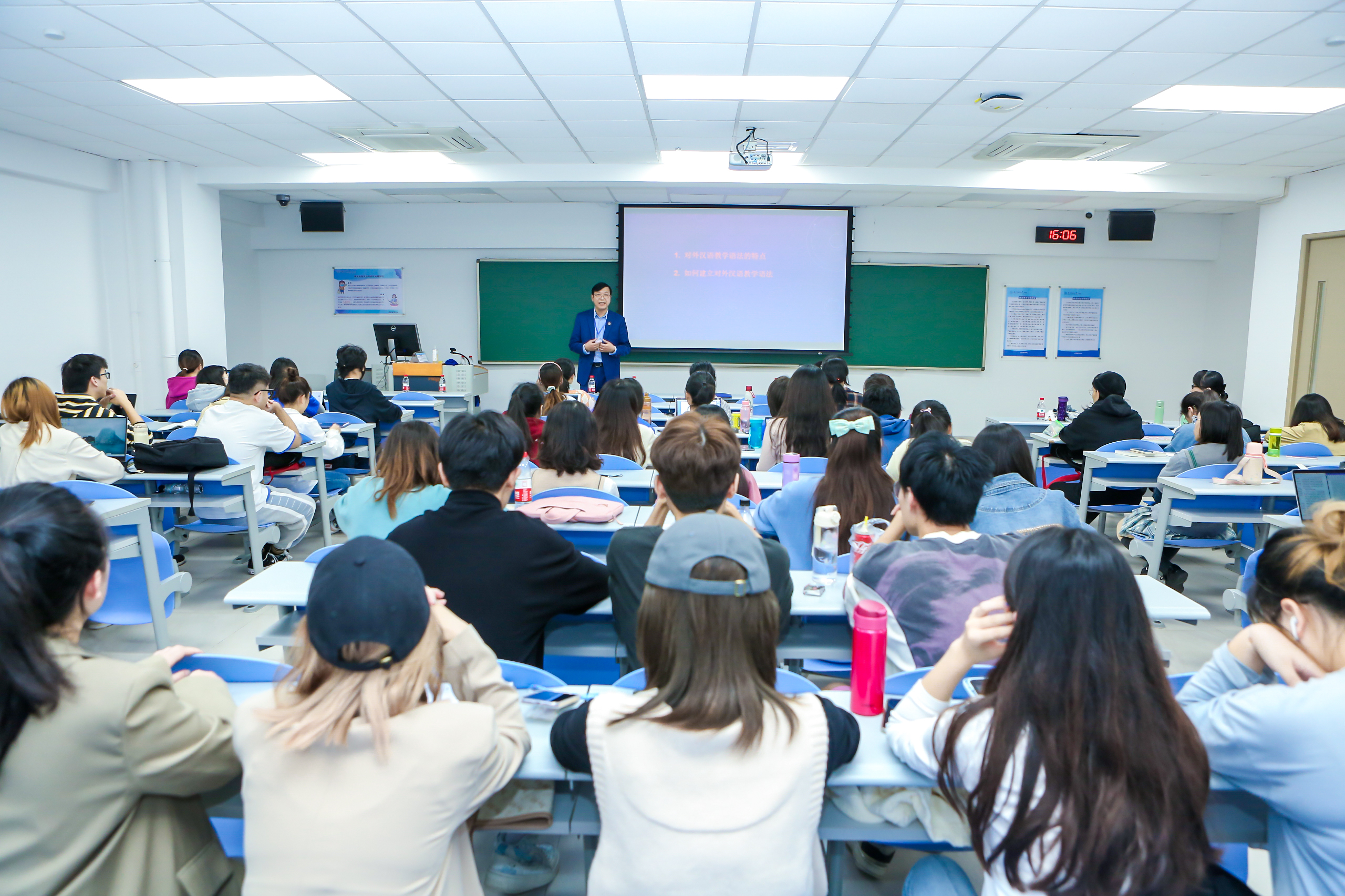